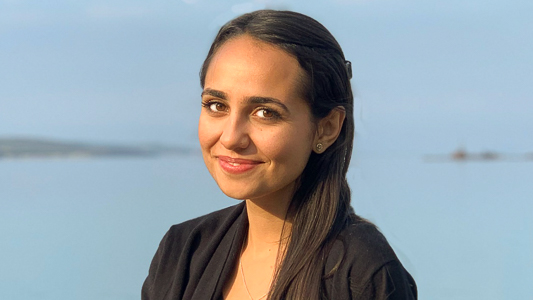 Mazelle, a first generation Iranian-American, is in her final year at Harvard Law School. At HLS, Mazelle is a Research Assistant for the HLS Program on International Law and Armed Conflict (HLS PILAC), co-Director of Social Good for the Harvard Association of Law and Business, and on the board of the Disability Law Student Association. She has worked as a Teaching Fellow for three General Education courses at Harvard College, including Ambassador Samantha Power and Professor Cass Sunstein's course on behavioral science and social change, and served as a Teaching Assistant for Professor Jim Baker's National Security Law seminar. She also has conducted archival interviews of Syrian-Armenians in Beirut, Lebanon with Rerooted Archive, in partnership with the IIIM on Syria.

Prior to law school, Mazelle worked as a Farsi translator in Lesvos and managed the Human Rights Investigations Clinic at the University of Hong Kong in conjunction with Amnesty International’s Digital Verification Corps. Mazelle has a B.A. in Political Science from UC Berkeley, and studied Politics, Philosophy, and Economics at Mansfield College, Oxford. She speaks Farsi.

Other people in the
No items found.